skip to main | skip to sidebar

Caesar, that is. Caesar Salad. Today, prompted by the new contest posted at food52 and foodtistically inspired by episodes of ATK that I was watching, I decided to test out some Caesar dressing recipes in order to find the best one. I began, of course, with my mother. For as long as I can remember, every Summer my Mom's Caesar Salad would reemerge from hibernation and blossom anew in my family's collective mouth. It was a joy. I also knew that she had a particular way of creating it. And so, with a little prying, she let me have it. Here is her recipe: 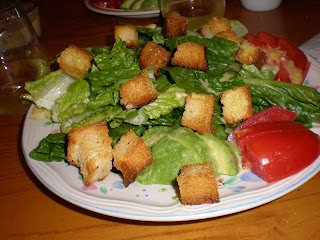 
1/2 cup olive oil
1/2 cup grated parmesan
Step: Basically, you combine everything in the blender/food processor until you get to the egg, wherein lies the mystique of this recipe. What's a coddle? Aren't you not supposed to coddle your children or something? What happens when you coddle an egg? Does the chick end up spoilt? Explanations from my Mom and online research revealed that coddling basically refers to a process of softboiling, except that while softboiling indicates a fixed outcome (hard white, liquid yolk) coddling is variable. In this case, I only coddled for a minute. I swear.
For this recipe, all it involves is placing a room temperature (if it's too cold it could crack) egg in a cup and pouring over boiling water, leaving it for one minute, and then pouring over warm water until it's cool enough to handle. When you crack it and pour into the mixture the white will be runny and the yolk will be thicker. Whisk all of the ingredients together. Then pour the olive oil in drop by drop at first until the emulsion takes and then pour a light steady stream all the while whisking. Afterwards, drop in the grated parmesan and mix. It is important here to use dry, aged parmesan as it is primarily the parmesan that thickens the dressing.
I knew right away that I was going to like this dressing since it smelled like home even before adding the eggs. But how would other people like it? In order to provide an alternative for the taste test I whipped up another recipe right before dinner from one that somebody submitted on food52. The classic Caesar dressing uses a different method to create the dressing and is much simpler, only using six ingredients. This recipe was published here by user lastnightsdinner.
Caesar Dressing:
Combine all ingredients except for oil in a bowl, whisk, and then whisk in the oil, very slowly at first, and then quicker as the emulsion takes. Serve with salad.


This dressing was much more like an aioli, and, in my fairly informed opinion, not really a Caesar dressing. I traded the lemon juice for champagne vinegar in order to provide a counterpoint and because I wanted to try it out and its lovely. 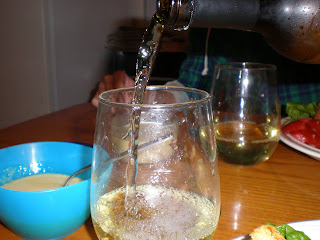 It turned out thicker and spicier than the other (due to the abundance of garlic), but tasters (me, mostly) found that it lacked complexity of flavor. But maybe I'm biased. Anyways, Jeff and I made some salads and croutons (ACME Sour Loaf croutons to be exact) and performed the deed. We also served our salads with a delicious white wine called Uvaggio made from the Vermentino grape. Uvaggio is from Lodi and it's super good and of course it was purchased at Vintage Berkeley. The final recipe will be a combination of the two and will also represent a fundamental shift in the emphasis of the dish. Are you excited? I am. Stay tuned for more info.
Posted by johnherbstritt at 10:45 PM